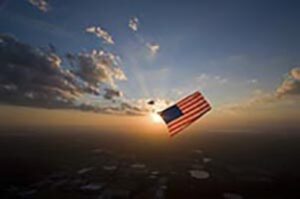 On Saturday, Sept. 7, 2019, the Appalachian State vs. Charlotte football game is sure to be an unforgettable night. The game starts at 3:30 p.m. at Kidd Brewer Stadium.

As part of the opening ceremony, Team Fastrax™ will perform an amazing aerial display with their 2,000 sq. ft. American flag, Appalachian State flag and red, white, and blue streamers with smoke.  The spectacle will be shown on the stadium screen with help from the team’s live air-to-ground video.

“We are honored to be performing our patriotic skydive for the Appalachian State game,” commented John Hart, owner of Start Skydiving, and Founder of Team Fastrax™. “The game is sure to be exciting for the whole family.”

According to the Appalachian State Football website, the Mountainers are 6-0 ATS in the last six non-conference games and 5-0 ATS in their previous five in September. They won their opener game against East Tennessee State. Moving up in the FCS world since their historic shocker against Michigan, Appalachian State has established themselves as one of the nation’s leading programs.

For more information on the game or to purchase tickets visit the Appalachian State Football website.