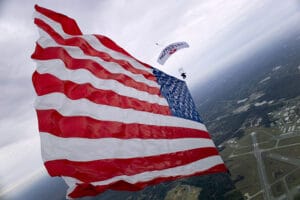 On Saturday, August 31, 2019, the Navy Midshipmen vs. Holy Cross game is sure to be an exciting night. The game starts at 3:30 p.m. at Navy-Marine Corps Memorial Stadium in Annapolis, MD.

When the National Anthem starts to play, as fans place their hands over their hearts, Team Fastrax™ will jump in with their majestic 2,000 sq. ft. American flag.

“We are honored to be performing our patriotic American flag skydiving for the Navy football game,” commented John Hart, owner of Start Skydiving, and Founder of Team Fastrax™. “Members of Team Fastrax™ have served the United States of America as part of the Armed Forces, many in combat, so we enjoy performing at any event that honors our nation’s military.

According to the Navy Midshipmen football website, the Midshipmen are 10-1 in home openers under head coach Ken Niumatalolo. This will be the fifth time in Niumatalolo’s twelve years that Navy has opened at home. CBS Sports Network will televise the game with John Sadak, Randy Cross and Sheehan Stanwick Burch on the call. The Midshipmen resume their annual game against Notre Dame, which reached the College Football Playoff last year.

For more information on the game or to purchase tickets visit the Navy Midshipmen official website.