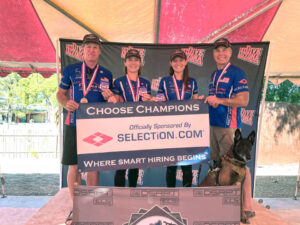 2-Way Sequential Teams consists of 2 skydivers, supported by a team videographer. They have 1 minute of working time to complete a pre-determined series of formations. A point is scored for each formation correctly completed in accordance with a draw made at the start of the event. The competition consists of 8 rounds, and within each round there are 5 different formations. The team must complete the series as many times as possible during the working time.