Team Fastrax™ has performed thousands of exhibition skydives at every entertainment venue imaginable. The team has performed as far away as Moscow, Russia, Doha, Qatar, Yanchi, China, Normandy, France and other notable countries. The skydive team consists of many Armed Forces veterans and is approved to jump into highly-restricted airspace. We are the only civilian parachute demonstration team to have performed over Ground Zero on 9/11 in New York City, the Pentagon in Washington, D.C., Independence Hall in Philadelphia, PA and over the Arizona Memorial in Pearl Harbor, Hawaii. 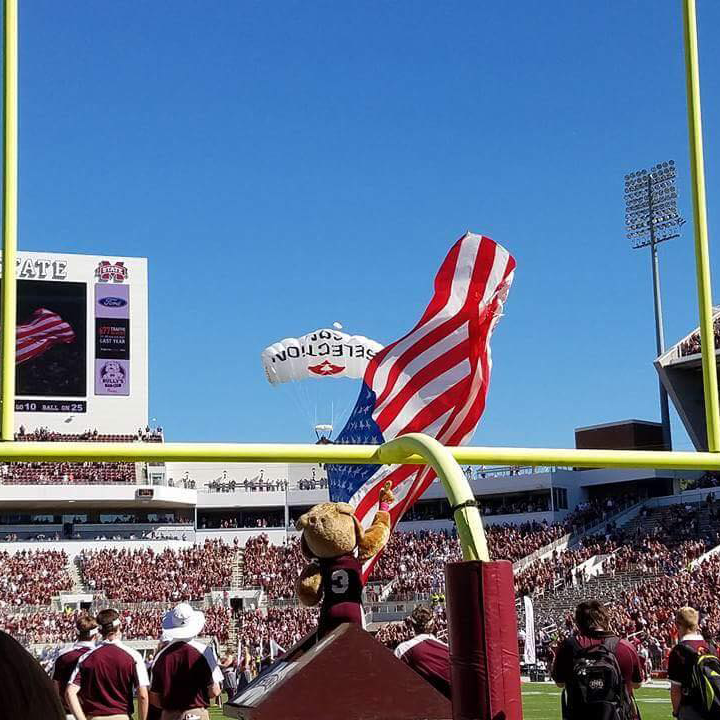 If you are planning a football opening ceremony, special football show, or after game event, Team Fastrax™ has a demonstration skydive to match your needs. Football events typically feature our patriotic show, an American flag demonstration skydive. Our parachute team will exit the aircraft over the football stadium and descend to a precise landing, thrilling the spectators, making an amazing football halftime show. 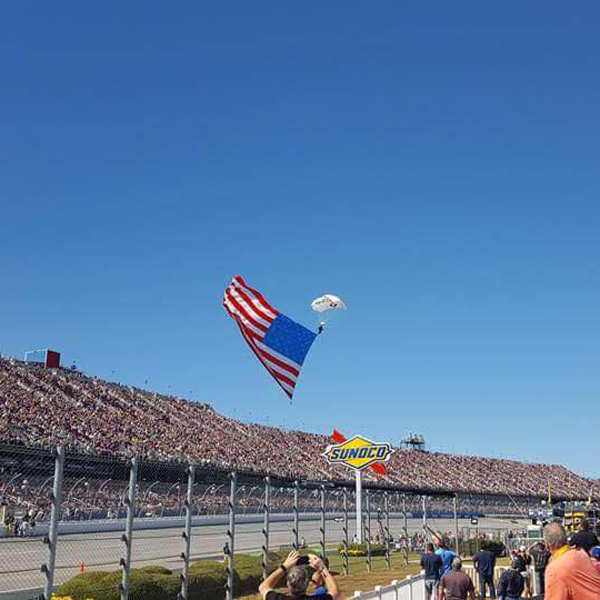 If you are planning a NASCAR or Formula One event, Team Fastrax™ has a demonstration skydive to match your needs. NASCAR races typically feature our patriotic show, an American flag demonstration skydive. Our parachute team will exit the aircraft over the raceway and descend to a precise landing, thrilling the spectators, making an amazing opening ceremony show. 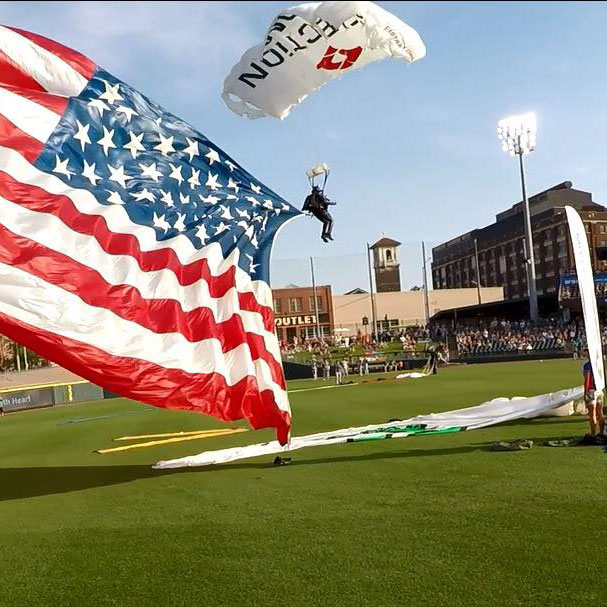 If you are planning a baseball opening ceremony, event opening, patriotic show, Team Fastrax™ has a demonstration skydive to match your needs. Baseball events typically feature our patriotic show, an American flag demonstration skydive. Our parachute team will exit the aircraft over the baseball stadium and descend to a precise landing, thrilling the spectators, making an amazing baseball opening show. 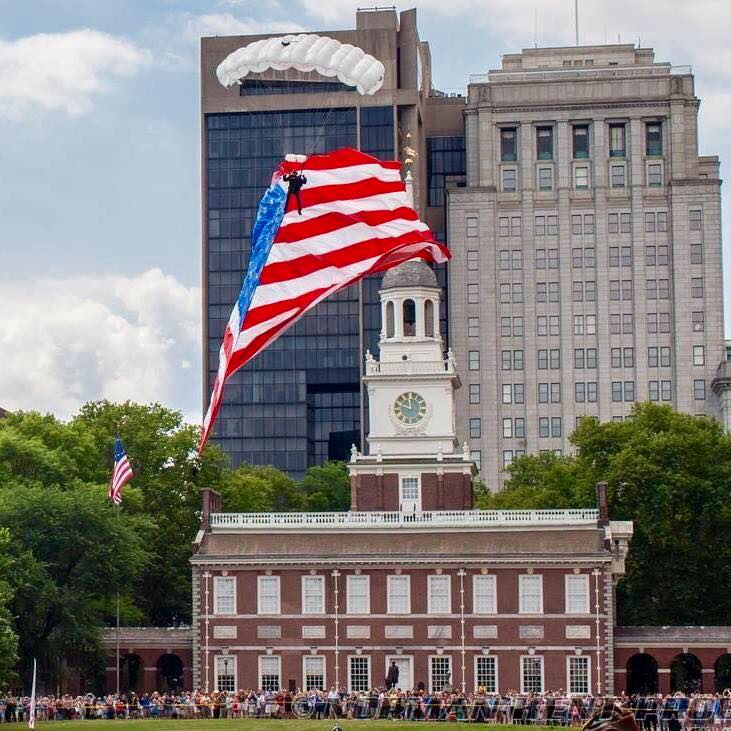 If you are planning a patriotic event, fireworks show, or 4th of July celebration, Team Fastrax™ has a demonstration skydive to match your needs. Patriotic events typically feature our American flag demonstration skydive. Our parachute team will exit the aircraft over the area and descend to a precise landing, thrilling the spectators, making an amazing American show. 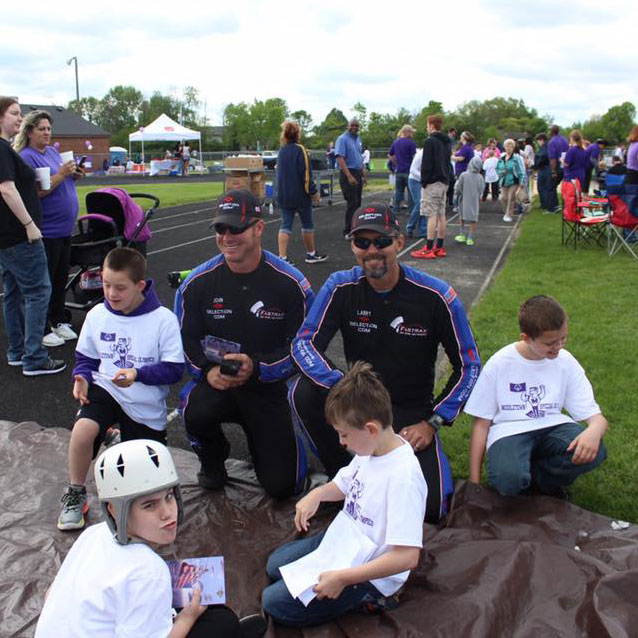 If you are planning a golf event, charity event, or veteran support event, Team Fastrax™ has a demonstration skydive to match your needs. Golf events typically feature our patriotic show, an American flag demonstration skydive. Our parachute team will exit the aircraft over the golf course and descend to a precise landing, thrilling the spectators, making an amazing opening to any charity or golf event. 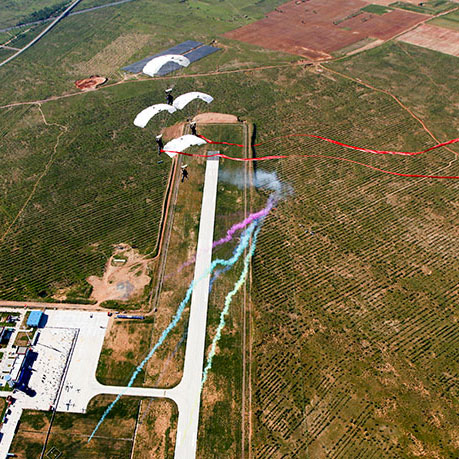 Nothing thrills airshow spectators more than The Team Fastrax™ professional skydiving team! No other parachute team can combine the largest flags flown under parachute with freefall smoke and pyrotechnics, canopy formations, high speed flying wingsuits, tandem skydiving, Live 1080 HD air-to-ground Video and high performance canopy piloting into a singular stunning On-Time, On-Target performance. The Team Fastrax™ professional skydiving team has performed for millions of spectators at airshows and festivals all over the world including the Dayton Airshow in Dayton, Ohio, The Air-Power Expo in Fort Worth, TX, and The General Aviation Forum in YanChi County, Ningxia Province in China.

Team Fastrax™ is the largest professional parachute demonstration team in the world. The team roster has more than forty active members with a culmination of more than 175,000 skydives. A Team Fastrax™ demonstration skydive typically consists of multiple members exiting one of our aircraft over a large crowd such as an airshow or major sporting event and descending to a precise landing, thrilling the spectators.

Our skydive demonstration performances can be seen in numerous movies and commercials and our world class stunt team has performed in multiple television shows. We know that the breadth and depth of exhibition skydiving venues are deep and wide and we have not seen it all, sometimes people surprise us with new and unusual venues, so surprise us.

Reach out to us today to learn more about how to have America’s Skydiving Team perform for you. On Time, On Target, Every Time! (References available upon request)

From Notre Dame Magazine: A life of great leaps

From Notre Dame Magazine: Nicole Condrey ’04 is the mayor of Middletown, Ohio, a city of 48,000 people to which she had no connection until 2017, when she moved there with her husband. The reason...

END_OF_DOCUMENT_TOKEN_TO_BE_REPLACED

From Journal News: Seven members of a Middletown-based professional skydiving team recently qualified for the 2022 World Parachuting Championships after competing in the U.S. Parachute Association...

END_OF_DOCUMENT_TOKEN_TO_BE_REPLACED

ANNAPOLIS, MD- The Duke Blue Devils will face off against the UCF Knights for the first time, at the Navy-Marine Corps Memorial Stadium in Annapolis, MD in the long-anticipated Military Bowl. The...

END_OF_DOCUMENT_TOKEN_TO_BE_REPLACED

Saturday, November 12th, 2022, the Navy Midshipmen and Notre Dame Fighting Irish will face off for the 95th overall time, and the 4th time at M&T Bank Stadium. The game starts at 12pm, and as...

END_OF_DOCUMENT_TOKEN_TO_BE_REPLACED 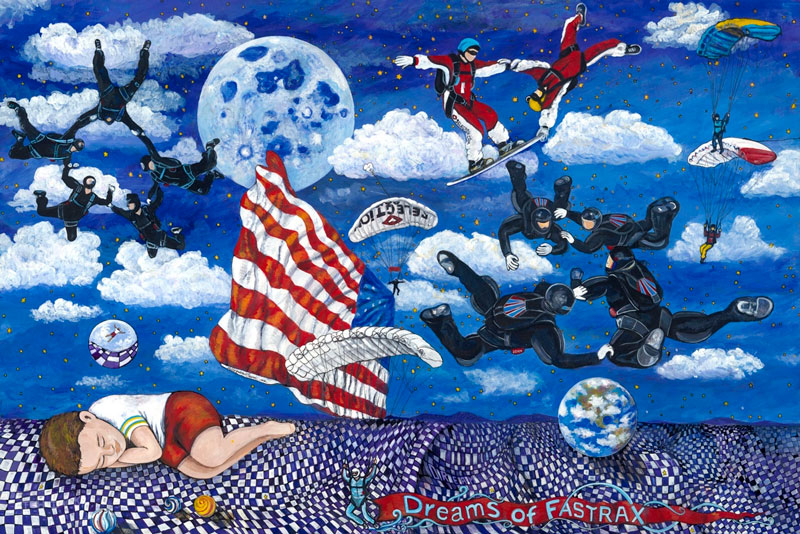 The above painting hangs at our National Training Center and was commissioned in 2003. The painting represents one of our most important missions as a team, to fulfill dreams. Dreams of Fastrax was created in 2002 as a way to facilitate the dream of flight for terminally ill children. Team Fastrax™ travels throughout the United States visiting terminally ill children and in many cases takes them flying in our aircraft, a local wind tunnel or in some cases skydiving. The team focuses on adventurous activities as the back drop to facilitate the enriching, healing environment for our Purple Heart Warriors and Gold Star families. The deep bonding that forms between the warriors and volunteers is priceless and the experiences are non-denominational faith centered. There are activities that take place year round via hundreds of skydiving experiences with Team Fastrax™. These ongoing activities take place primarily at the home drop zone of Team Fastrax™, Start Skydiving. However, in July/August of each year Team Fastrax™ organizes a five day Warrior Weekend to Remember (WWTR) that is filled with activities for our warriors. 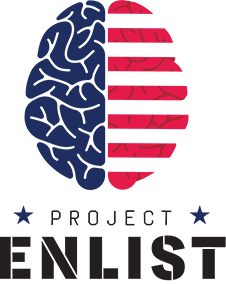 Team FastraxTM is a partner organization with Concussion Legacy Foundation (CLF)’s Project Enlist program. The goal of Project Enlist is to serve as a catalyst for critical research on traumatic brain injury (TBI), Chronic Traumatic Encephalopathy (CTE), and Post-Traumatic Stress Disorder (PTSD) in military Veterans. TBI due to improvised explosive devices (IED) and other military service-related causes is a significant problem for our active military and Veteran community. However, the scientific understanding of TBI and related disorders is in its infancy, and we lack accurate diagnostic tests for living patients and effective treatments. Service members diagnosed with TBI deserve our attention and support. Brain bank research is an essential step in developing effective treatments for TBI, CTE and PTSD so we can protect and support the heroes who courageously fight for our nation. Visit ProjectEnlist.org for more information.

We value your privacy. We use cookies on our website to give you the most relevant experience by remembering your preferences and repeat visits. By clicking “Accept All”, you consent to the use of ALL the cookies. However, you may visit "Cookie Settings" to provide a controlled consent.
Cookie SettingsAccept All
Manage consent

This website uses cookies to improve your experience while you navigate through the website. Out of these, the cookies that are categorized as necessary are stored on your browser as they are essential for the working of basic functionalities of the website. We also use third-party cookies that help us analyze and understand how you use this website. These cookies will be stored in your browser only with your consent. You also have the option to opt-out of these cookies. But opting out of some of these cookies may affect your browsing experience.
Necessary Always Enabled
Necessary cookies are absolutely essential for the website to function properly. These cookies ensure basic functionalities and security features of the website, anonymously.
Functional
Functional cookies help to perform certain functionalities like sharing the content of the website on social media platforms, collect feedbacks, and other third-party features.
Performance
Performance cookies are used to understand and analyze the key performance indexes of the website which helps in delivering a better user experience for the visitors.
Analytics
Analytical cookies are used to understand how visitors interact with the website. These cookies help provide information on metrics the number of visitors, bounce rate, traffic source, etc.
Others
Other uncategorized cookies are those that are being analyzed and have not been classified into a category as yet.
SAVE & ACCEPT